Norwegian ‘confident’ of US bid

The US Department of Transportation (DoT) on Thursday agreed to continue to review a foreign air carrier permit application for Norwegian’s British-based subsidiary Norwegian UK (NUK). 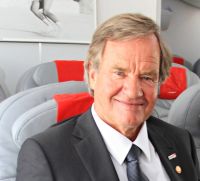 The airline wants the permit so it can operate flights between the US and Europe.

Norwegian said in a statement the effect of the DoT decision was that Norwegian UK’s permit application remained pending, and Norwegian was confident it would receive permanent authority.

The statement added: “Norwegian UK is a recognised British airline, with a large UK base and the support of the UK government.

“Given Norwegian UK’s clear and legitimate right to a Foreign Carrier Permit, we therefore remain confident we will receive final approval.”

Norwegian is the third-largest airline group at Gatwick, operating eight long-haul routes and more than 40 European ones. It also operates European routes from Birmingham, Manchester and Edinburgh airports.

The carrier’s flights between the US and Europe, including the UK, currently operate under the Norwegian Air Shuttle Air Operator Certificate.

“With US approval for Norwegian UK, [we] will be able to more effectively utilise the long-haul fleet … including the use of the same aircraft on both US and other long-haul routes,” the statement added.