Delta Air Lines last week began celebrating 25 years of service to Manchester since the inaugural flight touched down from Atlanta on 27 June 1991, when it formed part of the company’s largest period of international growth.

Since then, Delta, which operates a daily flight to New York-JFK, says it has carried 4.2m passengers between the airport and the US, more than the population of Manchester itself.

Nat Pieper, Delta’s senior vice-president for Europe, Middle East and Africa, said: “Our on-board product has developed enormously from when we started here in 1991, adding entertainment, wi-fi and flat-beds, but we still offer the same levels of customer service.

“Our commitment to Manchester and the North West remains strong and we look forward to welcoming more customers to New York and beyond.”

In carrying the 4.2m passengers over the years, Delta aircraft have flown 89m miles between Manchester and the US and now provides 2,296 seats a week between the city and JFK. The airline now uses a 225-seat B767-300ER on the route. 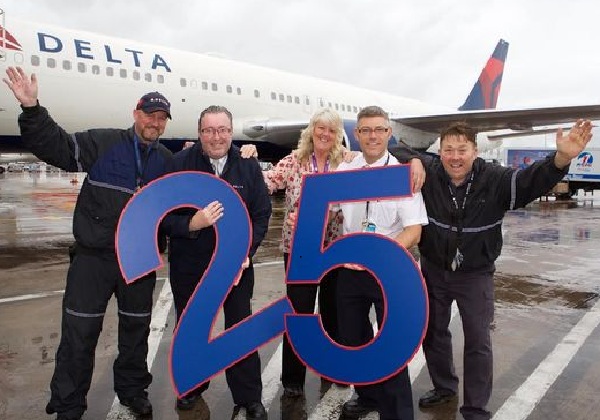