ON TOUR: Well met at Olympia

John Burke has visited conference and exhibition centres worldwide over the past four decades while writing about business travel.

Here he reports on this year's Meetings Show.

The mid-summer Meetings Show in central London is now a confirmed fixture, following further growth since it began in 2013.

This year’s event attracted 650 exhibitors and 900 hosted buyers, having moved to the larger area of Olympia Grand. It opened the day after 140 specialists attended the annual Association Meetings Conference, also in London, chaired by Linda Pereira, of CPL in Portugal, who is one of 16 advisers to the Meetings Show.

The show is also supported by 15 professional bodies, such as the Institute of Event Management and the Meetings Industry Association, some of which had stands of their own. This also applied to the International Congress & Convention Association, based in Amsterdam.

Spokeswoman Abigail Fletcher said, “There was 30% more space this year, and we established two lounges for the increased number of hosted buyers, 43% of whom came from abroad. There were at least 11,500 pre-booked appointments”.

Only a quarter of the exhibitors belonged to the UK, with 14 from Scotland, five from Wales, including the Cardiff Hotel Association, and 10 from Northern Ireland. Wedgewood DMC represented the Channel Islands.

Spain and Portugal were well represented among 32 European countries, while even Burma and Vietnam were among 18 Asian ones. The only Canadian presence was through a hotel chain, and the total of 13 countries in the western hemisphere were largely Latin American or Caribbean. Seven exhibitors had interests in South Africa, while Sana Hotels from Angola also had a stand.

Three exhibitors came from the Pacific area, including Tourism Australia, but the general overseas presence was overwhelmingly through the hotel industry. Hyatt newly joined other groups such as Hilton and Ritz-Carlton, whose Dubai sales director, Sajeev Vasudevan, said: “We are here because one in five of our guests are British.”

Otherwise, the largest block of exhibitors consisted of 109 destination management companies, followed by 80 conference centres proper and a similar number of sites with space for exhibitions. The list also included royal palaces and other historic buildings, a total of 23, as well as 16 sporting venues, including Edgbaston and Twickenham. Keele University was among13 academic institutions, advertising its facilities for conferences.

Aerolineas Argentinas joined seven smaller airlines at the show, and train operator Virgin East Coast was also there. VisitBrighton was among 16 British tourist offices with convention bureaus, while the 74 overseas ones included those of Hong Kong and Slovakia.

Malta’s spokesman, Peter Vella, who used to work at Birmingham airport, said: “We are here to open the eyes to new facilities on the island, which is very competitive outside of high season.”

Galway was a surprising exception among 15 exhibitors from Ireland, whose head of corporate tourism, Roisin Gaffney, said: “This is a unique opportunity to meet overseas buyers, but we are worried about the British referendum.” By contrast, two northern venue specialists said meetings in the UK would be unaffected whatever the result of the poll.

Nonetheless, the political risk was one of 80 subjects for discussion during the professional training programme, divided into 10 themes ranging from healthcare to technology and from branding to design.

Security, speechwriting, sustainability and social media were also on the lecture programme, which was distinct from one-to-one sessions with a panel 20 experts. These included one of the show’s advisers, Paul Kennedy MBE, who pointed out that not all consultants can do everything they claim.

No fewer than five speakers emphasised the importance of negotiating carefully with venues, but some of the sessions were not thought worthwhile. It seems there was a problem with public relations.

Significantly, much of the training was on the theme of “turning attendees into participants”. More from the floor and less pontificating from the platform was one solution mooted, but so was better use of technology such as power-points and slides.

A total of 52 exhibitors demonstrated ancillary services such as flowers, catering, insurance and registration. IDentilam of Horsham pointed out that well over 1,000 badges is not uncommon.

The Meetings Show was organised by Centaur Media, which also puts on the Business Travel Show each February, also at Olympia. 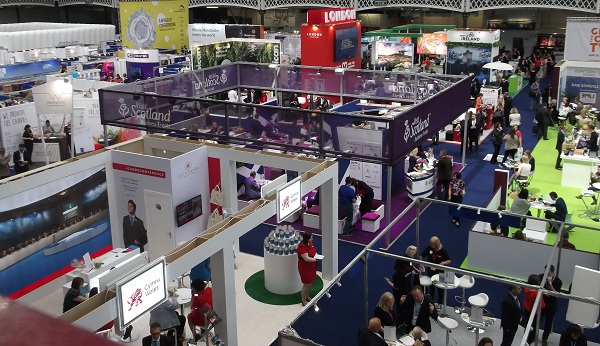