ON TOUR: Catching up with Boston

With a few days to spare after a trip to New York, BTN's Richard Cawthorne takes the train to Boston.

Boston is an easy city to get to know, compact, friendly and full of a sense of its place in American history. Faneuil Hall, the Freedom Trail, Paul Revere's house and, of course, the (alleged) site of the infamous Tea Party all reward repeat visits and in the way of US cities there is always something new to see too.

Rewarded with a few days off after my latest trip to New York, I decided it was time to catch up with the Big Apple's near-neighbour and, fulfilling another ambition, go there by train.

As with us and our train operators, Americans have a love-hate relationship with their national rail company, Amtrak, but its performance on the prestige routes, of which the run between Washington, New York and Boston is one, has in my experience always been pretty good. Amtrak's trains have also always been sexier than ours, though Virgin's and Eurostar's latest models are starting to change all that.

For this trip, I was using Amtrak's Acela Express Business Class, partly because I had work to do, partly because I wanted to try it anyway. Another consideration was the hotel where I was staying was just across from Boston’s Back Bay station, the train’s last stop before Boston central.

The journey was a little over 4hr through varying New England scenery, comfortable and on time. I had bought dollars at 1.5 to the pound, so the fare worked out at £68, and worth every cent.

As Amtrak says to anyone tempted to take a bus from New York, the train allows you to bypass congested highways and travel in comfort. If you have the time to enjoy the ride, it's a compelling argument and the views are memorable.

As one of America’s oldest cities, Boston is full of historic or just plain interesting structures. The boutique Hotel 140 in Clarendon Street, housed in a building constructed in 1929 as the home of the oldest YWCA in the US and now on the National Register of Historic Places, is one such.

It has 65 newly-renovated rooms, small by modern standards but with all the facilities, including free wi-fi and cable TV, a 24hr business centre and 3,500sq ft of meeting space. The hotel is also a 4min walk from Copley Square, 0.3mi from one of Boston’s top retail developments, the Shops at Prudential Center, 0.7mi from the Public Garden and within walking distance of most of the other main attractions.

The Financial District and Hynes Convention Center are also nearby, making the hotel convenient for business travellers, but if boutique is not your style, Boston, as New England’s economic and cultural hub, has plenty of other hotels suitable. Leading names include the Lenox, Onyx, Doubletree by Hilton, Boston Park Plaza, the Westin Copley Place, Seaport, Taj and the Boston Marriott. 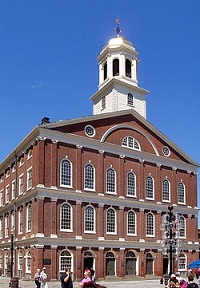 As well as identifying the main street and the river, if there is one, my other rule for finding my way around anywhere is to take the sightseeing bus tour. In Boston, the hop-on, hop-off Old Town Trolley covers the city from the North End to Cambridge, the historic baseball park to the Seaport, and all points in between.

It’s an entertaining journey, enlivened by the characters doing the driving, sometimes in costume, sometimes playing suitable music (the theme song from Cheers is one example) and costs about £25 depending on the exchange rate. Without it, I would not have found James Hook & Co’s lobster shack on the waterfront at Northern Avenue, whose lobster rolls among other things are, as they say here, to die for.

Overshadowed by the skyscrapers of the Financial District, near the Langham and Boston Harbor hotels, its location ensures a stream of well-dressed business types happy to mix it with the more casual visitor to dine on its famous food.

The OTT tour takes in all the best-known sights and it’s easy to leave the trolley at any given stop to explore and then rejoin the itinerary when the next vehicle comes along. There are the likes of Faneuil Hall, Quincy Market, Old North Church, the USS Constitution Museum, the Bunker Hill Monument and many more to see, while modern times are also catered for with a stop at the Cheers bar, as in the long-running TV series.

Apart from the history, other things I liked about this visit included one of Boston’s most popular restaurants, the Atlantic Fish Co, a rival to the iconic Legal Sea Foods operation.

Also catching my eye was another atmospheric bar, Towne Stove & Spirit, next to the convention centre on Boylston Street, where happy hour is distinguished by a lavish free buffet and drinks at reduced prices. I was there with a friend for two hours and managed to spend less than US$25.

As usual, it was a case of so much to see, so little time. I was in town for two nights, with my British Airways flight awaiting at Logan Airport on the evening of the third day. I did as much as I could, but there’s plenty left for the next visit.