Boeing and Xiamen Airlines, China's only all-Boeing carrier, have finalised an order for 10 Next-Generation 737-800s, valued at $960m at list prices. 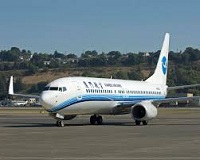 "The 737-800 is the best-selling version of the highly successful Next-Generation 737 family," said Ihssane Mounir, senior vice president, Northeast Asia Sales, Boeing Commercial Airplanes. "We are pleased to see the 737-800 continues to play an important role in Xiamen Airlines' fleet expansion."

The news of Xiamen’s order comes a month after Boeing and Ryanair marked a milestone with the delivery of the Irish airline's 400th Next-Generation 737-800. Ryanair operates the world’s largest fleet of the model.