Another new airline has joined the ranks at Birmingham Airport with the start of a five-times-weekly service to Prague by Czech Airlines.

The launch marks the flag carrier’s return to Birmingham after a 15-year absence. It is operating the service with an Airbus A319 with 12 Business Class seats and 126 in Economy and connections to a long list of Eastern European cities.

The first flight was greeted at Birmingham with a traditional water-arch salute from the airport’s fire service and an official welcome from airport aviation development director William Pearson.

Ján Tóth, Czech Airlines’ director of commerce and marketing, said: “I am glad to see our company returning to Birmingham after such a long time to connect it directly with Prague.

“We strongly believe a direct connection between both cities will contribute significantly to the growth of business as well as tourism between us.”

The Birmingham Prague service operates on Mondays, Wednesdays, Thursdays, Fridays and Sundays. It is one of 11 new routes the airline is running for the 2016 summer season.  www.czechairlines.com   www.birminghamairport.co.uk 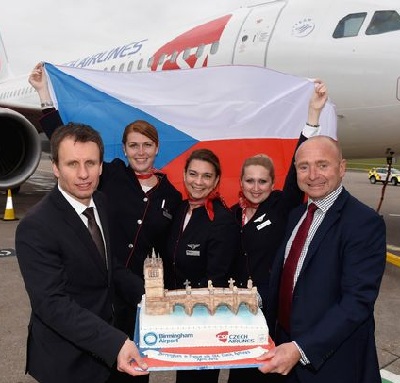