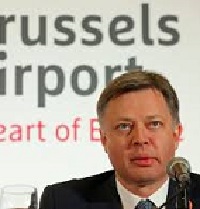 Brussels Airlines' flights took off for Faro, Athens and Turin in what airport chief Arnaud Feist described as “a sign of hope”.

Zaventem’s terminal is still closed to trains and buses, with passengers being allowed to access the airport by car or taxi only.

Vehicles and passengers travelling to the temporary departures hall are being screened on the access road, and additional police, ID and boarding-pass checks are being carried out at the entrance to the area.

Passengers then proceed towards the departure gates, where the usual access and security controls are in force. Anyone not flying is not allowed into the airport.

Feist said it was hoped the airport would be back at full capacity by the end of June.

Meanwhile, Dutch authorities are warning of 4hr queues at Schiphol, now regarded as a prime target as it is easier and quicker to reach than Paris from what is seen as a terrorist hotbed in Brussels. The Netherlands minister of justice is facing dismissal after he cut the security budget and then lost suspects named by Turkey. www.brusselsairport.be  www.amsterdamairport.info