A long time stalwart of BBC Radio and a much respected journalist John Hosken has suddenly passed away. 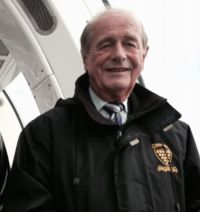 John, a Cornishman, was headhunted by the BBC to anchor ‘Voice of the North’ in 1966 and reported on the introduction of both Concorde and the Boeing 747.

As a writer he was the last person to interview Sir Frank Whittle for the BBC’s “The man who shrank the world” and also made a radio documentary about the British Airways near disaster in June 1982 when all four engines cut out on a 747 Australia-bound over Indonesia at 37,000ft.  Captain Eric Moody calmly re-lit the motors at 12,000ft but that was not the last of their problems.  They had to land the aircraft virtually blind, the windscreen covered by dust, and most of the instruments failing.  Volcanic dust was the problem.

John was a Bard of the Cornish Gorsedh, a non-political organisation which exists "to maintain the national Celtic spirit of Cornwall", and was a member of Mensa.

Our condolence to his wife of 38 years Gillian, a former BBC World Service producer, sons Andrew and James, and daughter Petrie.  Funeral details and other information from  john@hosken1.fsworld.co.uk