With a mini-boom under way Inverness Airport itself is expanding.  Currently being developed is a near doubling of the departure lounge and the introduction of a new arrival hall for international passengers.  The airport's security search area is also being refurbished and expanded. 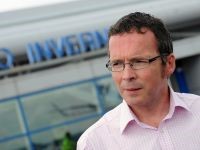 British Airways and KLM plan to introduce daily services on 3 May and 17 May respectively, BA into T5 at Heathrow and KLM to its Amsterdam hub.

easyJet has been established at Inverness for some time and will increase flights to Gatwick between March and June from the current two a day, adding a third on Mondays, Fridays and Sundays from 27 March.

The airline says it will also up the Inverness – Luton service from a daily to two flights a day service on Mondays, Wednesdays, Fridays and Sundays.

Inverness is operated by the Scottish government-owned Highlands and Islands Airports Ltd.  Last year it recorded an 8.9% growth over 2014, making it 29th in the UK airport league, 667,560 passengers, just behind Bournemouth (705,433) and with Prestwick next up (609,937).   www.hial.co.uk/inverness-airport