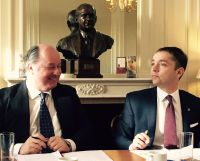 ERA is encouraging European governments to embrace more ‘long-term thinking’ as the LCCs will quickly withdraw if the route doesn’t succeed.

ERA, representing 50 airlines, including Flybe, advocates more PSO protected routes, which will aid connectivity.  The value of connectivity is highlighted in the newly published EU Aviation Policy, but not promoted, said Simon McNamara, ERA Director General.  He marks the new policy 6 out of 10, with few deliverables and no plans to remove any aviation specific taxes.

According to Eurocontrol estimates 12% of expected demand will be “unaccommodated” by 2035, the equivalent of two million flights and a loss of €28-50m to GDP.  There is a lack of new runway/terminal capacity, while outside Europe there is plenty of new capacity coming, including a new six-runway airport in Istanbul, MacNamara noted. www.eraa.org

No prizes but who is the guy in the middle?  info@btnews.co.uk

There is an inherent contradiction in Mr MacNamara's comments. He wants more subsidy for more PSO routes but the removal of taxes from aviation. You cannot have subsidy without tax revenues (unless the latter is dumped on someone else, of course. Economies work better (and thereby will generate more passenger demand overall) if there are fewer taxes (and subsidies).