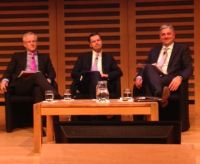 Air connectivity is vital for the future and, under the watchful eye of LSE's Professor Tony Travers, London’s three major airports pitched forward with their ideas for the next 10 years.

From Stansted managing director, Andrew Harrison, pointed out that this week the airport, now owned by the MAN Group, will celebrate 25 years since opened by The Queen.  He highlighted the success of the Cambridge corridor but emphasised frustration with the slow progress of improved rail connections both north and south.

John Holland-Kaye, CEO of Heathrow, spoke of the continued success of the new T2, with more developments about to take place now that T1 is finally closed.  At T5 he noted that direct lounge access is on its way for First Class passengers.


The final speaker was Stewart Wingate, CEO of Gatwick, who could not resist the temptation to promote his airport for London’s new runway.  www.london infrastructure summit.com