Drunken passengers are seemingly becoming more and more of an airline problem symbolised last week when a Gatwick Thomson flight was delayed whilst 25 passengers were removed. 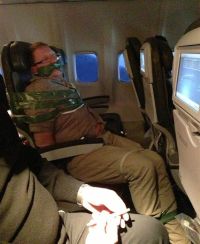 A Thomson Airways Boeing 787 Dreamliner was due to take off for Costa Rica when a large group of people allegedly started being abusive to cabin crew.

Witnesses said that the flight was first delayed due to technical issues before the passengers started being abusive – with the total delay amounting to three hours.

Police boarded the flight to remove the passengers – which included a 14 year-old boy – after the pilot refused to fly with them on board.  Sussex police escorted them from the aircraft to landside and left it at that.  The punishment was no flight.

A Thomson spokesman said: ''We operate a zero tolerance policy in relation to any disruptive behaviour and several customers were asked to leave the aircraft.  We worked as quickly as possible to ensure the other customers could get away on their holiday."  www.thomson.co.uk/flight